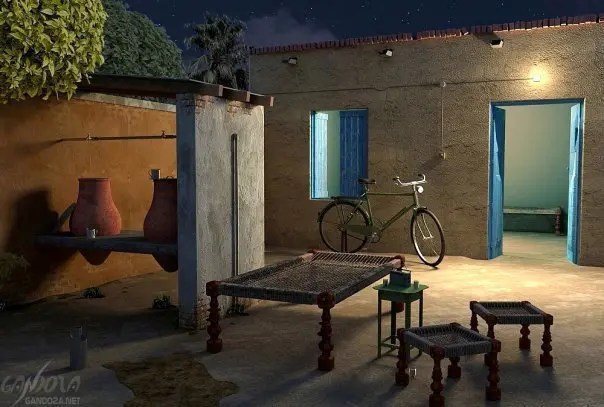 Is the weather getting hotter, or is it a change in lifestyle that has got us sweltering? This question, I have been toying with for the last twenty years. At one time, ceiling fans did the job of keeping us cool nicely. Then came the water cooled ACs on the scene. Now, for some, only split-level ACs will suffice. So, how did we stay cool before our air was conditioned?

Every indigenous people know how to live in their country. It’s just that as latter generations progress (if you what to call it that), sometimes the wisdom of elders is disregarded. Let’s take our region here in North Africa, in particular Sudan. The climate has always been hot. When students would complain of the heat, I would remind them that its always been hot in Sudan. However, what they were unaware of was that their discomfort wasn’t solely due to the natural heat. Their discomfort was also due to a rapid change in lifestyle.

In the past, houses were built with natural materials. Jaloose, adobe or rammed earth, was the main building material for houses. The walls were usually thick and rendered with a mixture of sand and gum Arabic. This natural combination prevented heat transfer which is a common factor in cement construction.

Additionally, the houses were a series of detached rooms. Each room had windows on opposite sides (north and south facing), which provided cross ventilation. Air circulation and drafts were created by the empty spaces between rooms along with early morning and early evening shade that kept temperatures lower in the rooms without electricity or ACs.

The areesha, awning was another very important addition to the homes. It provided shelter from the sun, but having two to three sides open, allowed the free flow of air.

In rural areas where the yards are big and direction is not dictated by city planning, houses were angled towards the qiblah which from our geographic position in Sudan, provided an early shade on the front of the house where people would place beds out and relax.

When it came down to individual comfort, nothing compared to al angareeb, the traditional roped bed. A wooden frame mounted on four legs, loosely woven with palm-fiber rope, it was completely open to air circulation, over and under. Its lightweight construction also made is mobile. One person could move it literally with the shade.

Traditional clothing was also effective in staying cool on hot days. For men, the white reflective jalabiyya, thobe and the lightweight arragy, under thobe, created layers that aided in air circulation for the body. The tobe, large wrap worn by the women likewise had the same effect.

For refreshment, there was (and still is) the zeer, earthen water pot. The baked clay pots literally sweat and any slight breeze cools them thus the water inside. When filled at night, the water settled and cooled, maintaining its coolness the whole of the next day.

So next time you complain about the heat, take a close look at your home, your green space (or lack thereof), your lifestyle, and your clothing, and see how far away you are from the former generations who knew how to stay cool without the aid of electricity and ACs.

A Golden Nugget of Advice

Tips for Working from Home

Life Out of Context